Yesterday I searched for migrant birds in Wells Woods for the third time in four days. Peering upwards at the canopy of birches, pines and sycamores is starting to leave a crick in my neck. Today was a meet-up with Durwyn Liley, my longest-standing friend, who runs Footprint Ecology. Yoav Perlman was chomping at the bit to get out (particularly since we were demoralisngly sensible on Friday and cancelled our planned Cedar Waxwing/Scilly twitch) and joined us. Within five minutes we had located a Yellow-browed Warbler and a Firecrest close to where Terence, Ian and I had them on Tuesday - so probably the same individuals. This boded well, but craning our necks, pishing and tongue-clacking for the next few hours failed to produce anything better. Just as we returned to the car, news came through of four Common Cranes flying west over Stiffkey a few minutes earlier (and, prior to that, over Cley). Rushing to the estuary wall we looked eastwards. Sure enough, Yoav picked up the quartet coming towards us. After a few minutes pfaffing, when they were deterred either by crossing water (the estuary) or by wind (it was pretty breezy), they continued our way and afforded fine views as they hrruuued their way overhead and into the distance. Pleasingly, they continued to be tracked westwards until at least Holme. Although I see Cranes regularly now that I live in Norfolk, encountering them in quasi-migration mode is particularly exciting. 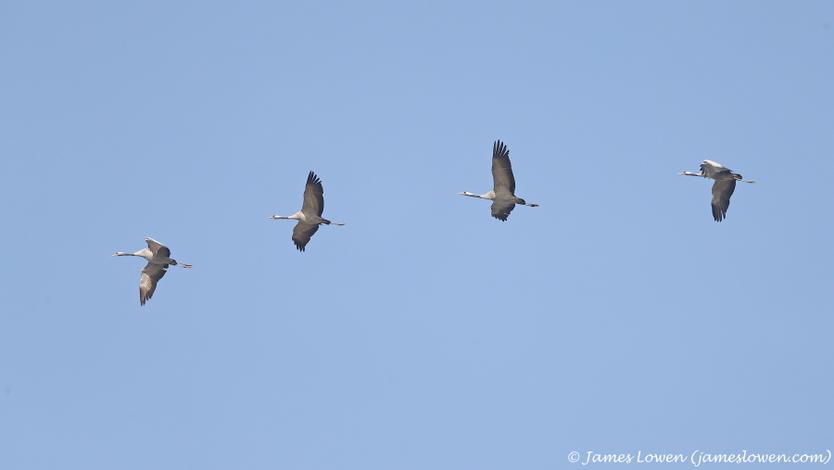