So time for a bit of enjoyment. The bird fed constantly in a paddock, rapidly probing the sodden turf to extract invertebrates and earthworms.  Occasionally, it raised its crest fully - a Punkbird if ever there was one. It started off pretty distant - perhaps 60m away - but gradually worked it way closer, approaching to within a cricket pitch length or so. Had there been any light at all, the pics would have been great. As it was, I had to contend with slow shutter speeds and relatively high ISO. But a great bird. 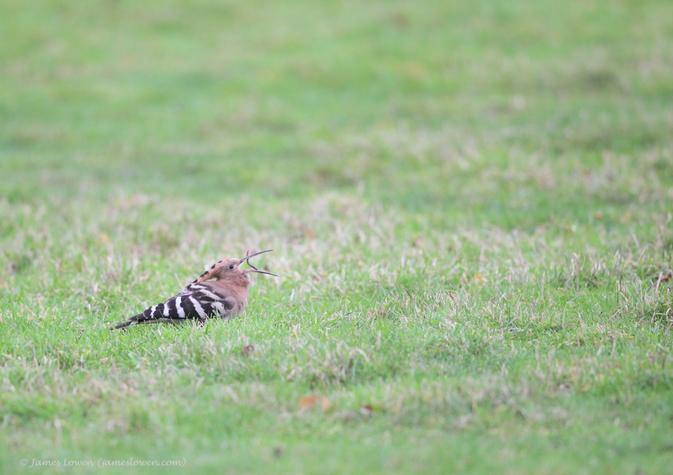 After yesterday's school run, I popped back to see the Crostwick Hoopoe. I had seen it at the weekend, but only watched it for a few seconds due to horrible weather and parental duties. I've been struggling to think through how many Hoopoes I have seen in Britain. Surprisingly, it may only be one - and that was 25 years ago (Ravenscar, N Yorks), on a school birdwatching club outing where we also saw an East Coast Red-eyed Vireo. Perhaps I have seen others, but I can't remember them. I know I have dipped a few - a couple in London and Kent, for example. But I've never travelled out of my way for one, given how frequently one encounters them in Europe.