Earlier this year, when I was interviewed by Bradt Travel Guides, I said that one of my wildlife aims for my 2016 summer of British wildlife was to see more clearwingmoths. These amazing wasp mimics fly by day yet are very difficult to see without the acquisition and deployment of chemical pheromone lures. These rubber bungs or plastic vials each secrete a specific 'scent' into the air, which attracts clearwings like, erm, moths to a light. As I reported in my last blog, I finally struck lucky recently, seeing three species of clearwing within three days. Game on. 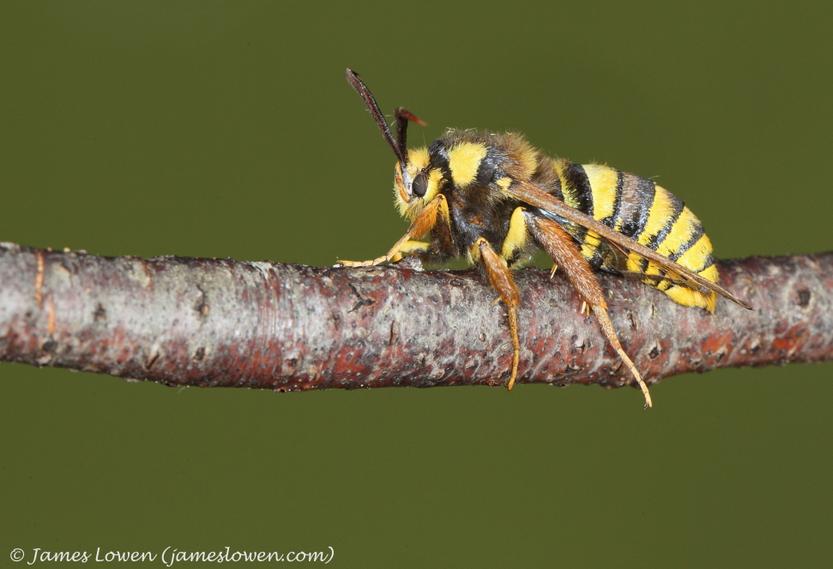 After a bit of pfaffing on Ringstead Downs and a big breakfast at Burnham Deepdale, I headed to Holme village where Norfolk Ornithologists Association warden Sophie was exhibiting the contents of some mothtraps. My hope was that she had caught Lappet. She hadn't. But she did have two sandy-dune specialists on show, both of which were new to me, and both of which are Nationally Scarce: Sand Dart and Shore Wainscot.

Fast forward to Saturday night this week, I was idling away the Germany vs Italy Euros quarter-final by flicking through habitat preferences of the clearwings. I came to a stop at Red-belted Clearwing: "favours old apple orchards". Like the one in my neighbours garden, and the one that filled my garden until nine years ago. Fuelled by footie beers, I emailed Dougal McNeill and Will Soar to suggest that I would lure one in my garden the very next day. Yeah yeah.

The twitchers were delighted. Will Soar couldn't keep a grin off his impressively bearded face.

Then I hung out the Hornet Moth lure. Within five minutes, it worked. Again, close examination showed that this was a different individual to the previous day. Again, I hosted  'cuppa and clearwings' afternoon for a handful of twitchers who couldn't make the previous day, plus Will Soar, cheekily back for seconds.

Everyone went home happy. I went to bed ecstatic and disbelieving. Waking the next day, I decided to see whether the event was a one-off. It wasn't. Within two minutes of hanging the Red-belted Clearwing lure, I had two individuals flying around. I caught one which close examination showed was a different individual to that caught the previous day. What a belter!

That should be the end of the story... but isn't. On Tuesday, I decided to try my luck bigtime, and hang out a lure for Raspberry Clearwing on our garden raspberry plants. As I approached the plant, what should be sat on one of the upper raspberry leaves but A CLEARWING, sat out in the open, bold as brass. I reeled in shock. Heart pumping, I approached it carefully. But it was 'only' a Red-belted Clearwing, not a Raspberry. My fortune wasn't of the magnitude of Willy Wonka. Nevertheless, it showed what wildlife wonders even the tiniest plot of green space can have. And how I may never have known this had it not been for a clever chemist somewhere in Germany. 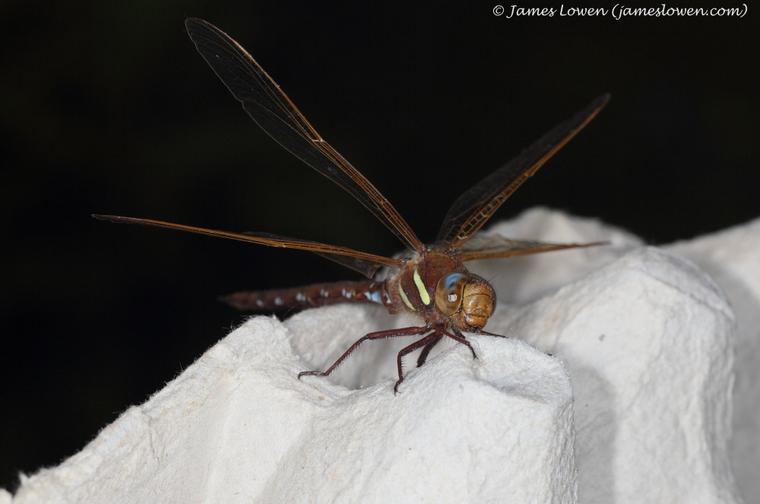 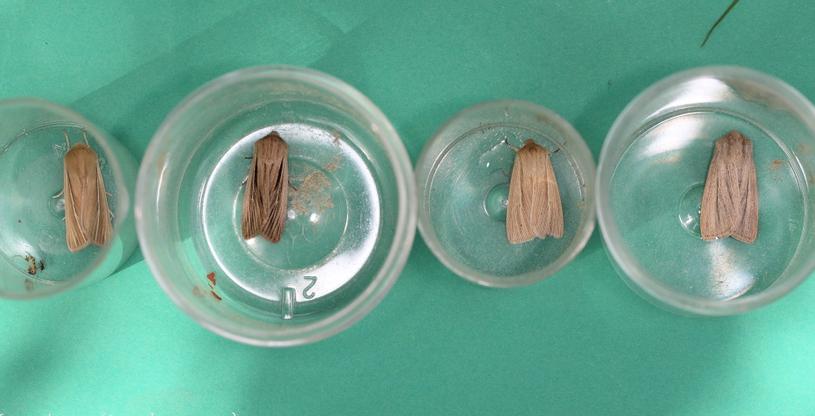 I was well aware that a number of local moth-ers would be keen to seen Red-belted Clearwing. Once I was back from Maya's party, nine or ten people came round to enjoy the sight. In a fit of enthusiasm, I hung out the other lure that I had on a string. It could have been any species, to be honest, but it was Hornet Moth. Given that this species is typically active early morning, there wasn't much point in trying to lure it at 16h30, particularly to a site where it wasn't known and which had no poplars in the vicinity. And then... As the hordes of twitchers supped tea and ooohed over the clearwing, I spotted a hornet buzzing the lure. No, not a hornet, but a Hornet Moth! The insect was swiftly caught, and I went into raptures of joy. Two amazing clearwing moths in my garden! 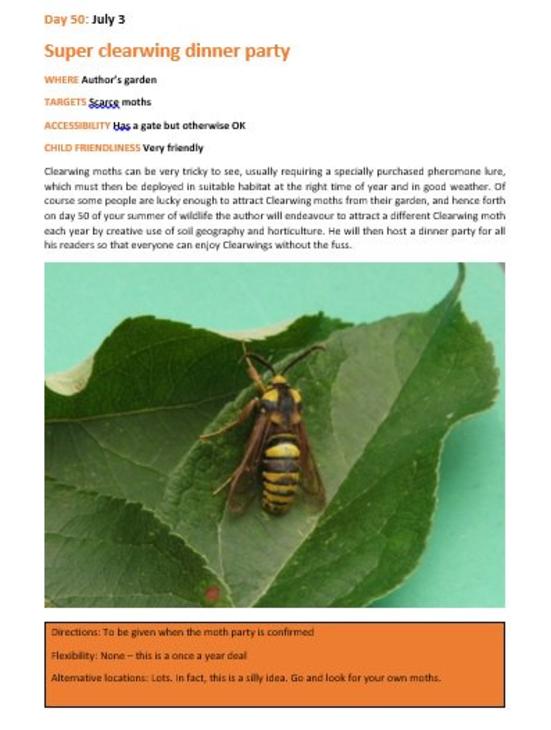 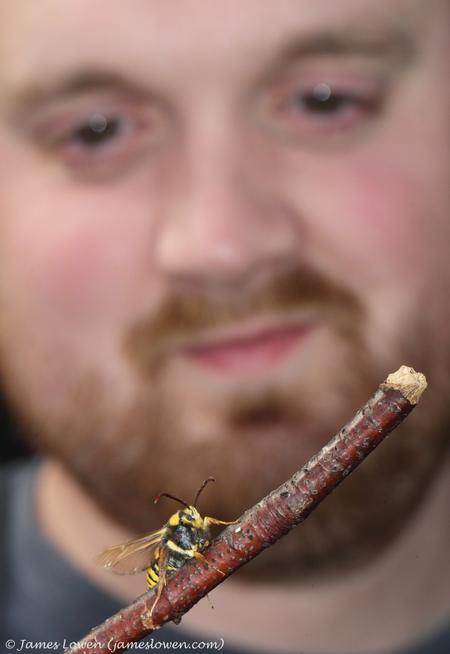 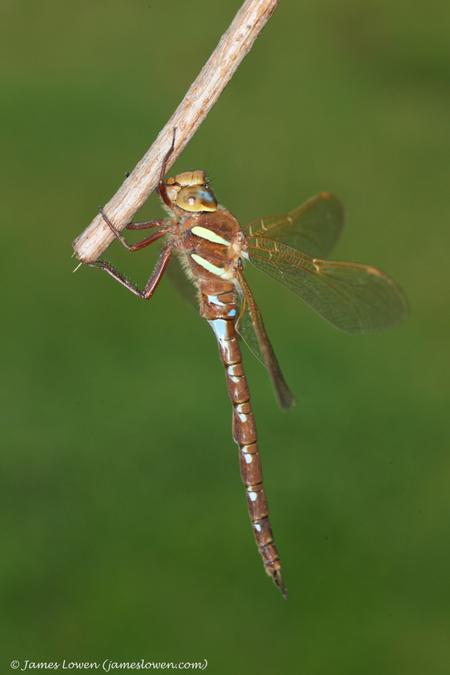 Well, the next day dawned. Sifting through the mothtrap before heading to the coast, I came across the beast above. That's right. A Brown Hawker. How on earth did that squeeze through the funnel into my trap? And what was it doing flying around at night? Whatever the reason, it was an opportunity not to be sniffed at, so I slunk off coastal ambition, diverting an hour to photographing this amazing insect. I have usually found Brown Hawkers hard to approach, so observing one at point-blank range was simply sumptuous.

Meanwhile, James Emerson decided that my book A Summer of British Wildlife needed a rewrite such that Day 50 comprised 'cuppa and clearwings in the author's garden'. So, being a clever lad, he mocked up a replacement page.

There were some neat moths in the trap, but I will save those for another blogpost. Once they were processed, potted or hidden in vegetation away from the eye of hungry Robins, I headed to the coast. My aim was to get very wet lying on the beach at Gore Point, photographing the Great Knot at close range. My belated departure didn't bode well. By the time I reached Holme Dunes, Mike Weedon (plus son & friend) were trudging back. There had been a small flock of Knot, but it had flown - and, indeed, at that moment, we watched the flock zoom towards Titchwell. I headed to Titchwell, and, sure enough, the Great Knot was on the freshmarsh. Views were a bit closer than when I saw it on the first day, but all I could glimpse were its head and shoulders, the rest of the bird concealed by the homogeneous grey of winter-plumaged (Red) Knot. It may churlish to be disappointed at seeing a mega, but given the hopes I held for getting a decent image, disappointed I surely was.

Nice digression that, but remember this is a blog about clearwing moths. Arriving back home, I had 15 minutes to grab some lunch before taking Maya to a party. But it was sunny. So I hung out two Red-belted Clearwing lures below the apple trees... in vague hope. Within a minute, each had a clearwing buzzing round it! I swiftly potted one, confirmed it was Red-belted... and danced like a maniac. A Nationally Scarce moth, a Norfolk rarity, in my garden! 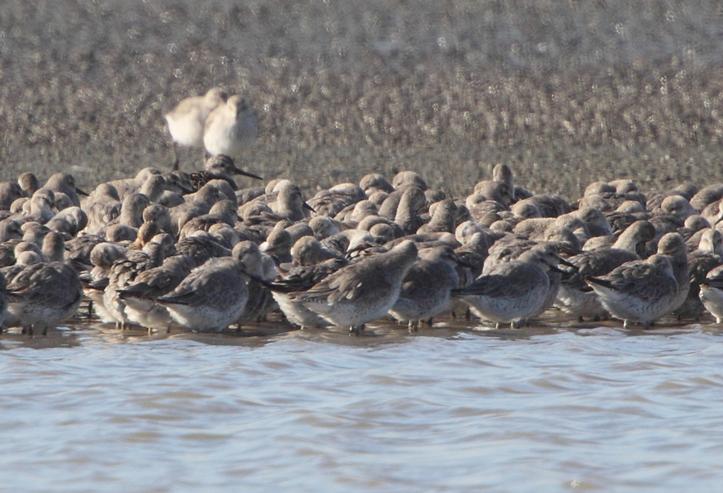 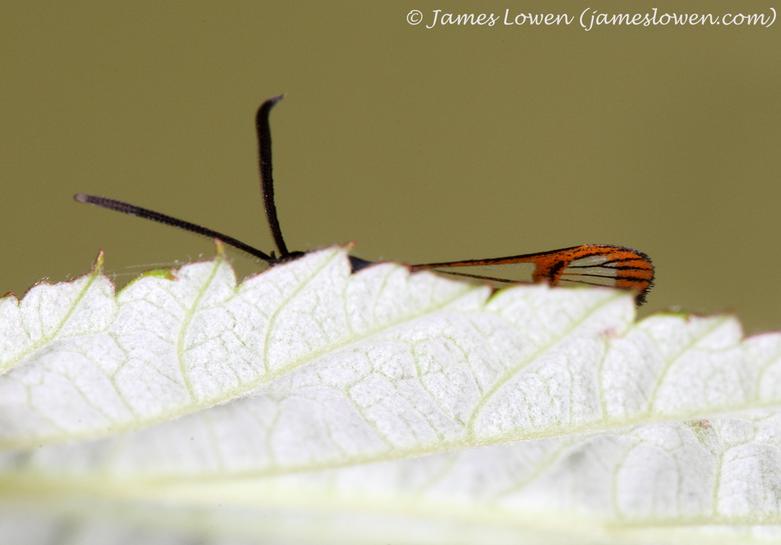