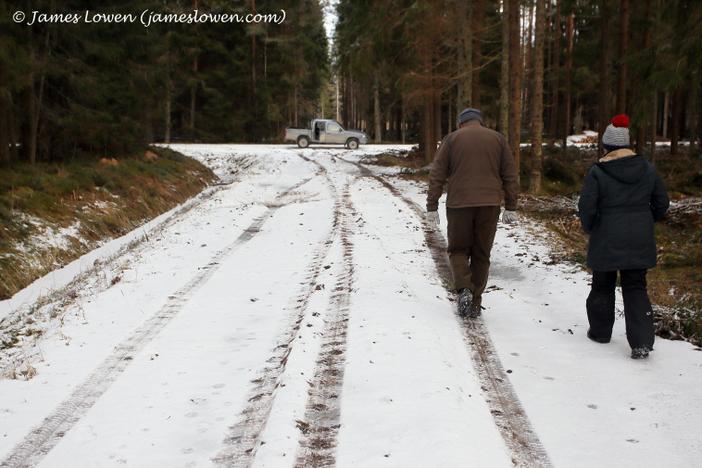 I have just returned from a short trip to Estonia, with thanks to Estonian Nature Tours et al. (thanks to Sandra, Marika, Tarvo and Ivo). My aim was to see my second species of lynx in a week after last weekend's success with Iberian Lynx. Amazingly, we succeeded, seeing a female and cub Eurasian Lynx! 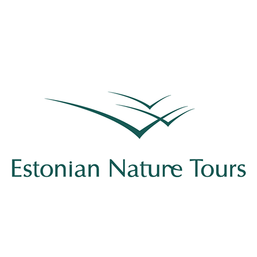 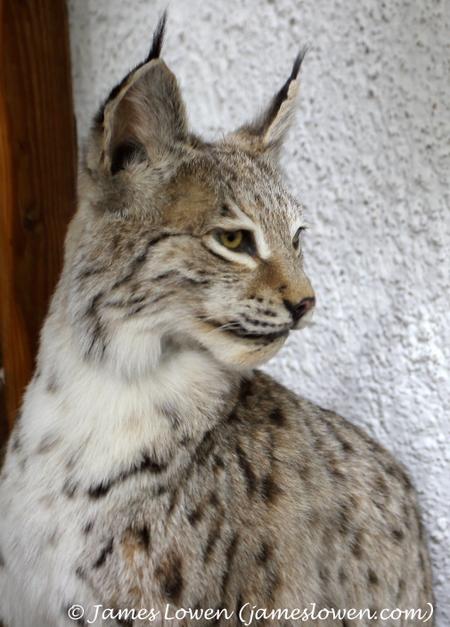 The Eurasian Lynx site was in Kõrvemaa Landscape Protection Area, about 1 hour south-east of Talinn. We based ourselves at Jäägri Villa guesthouse, which was rather boutique in style, albeit with numerous hunting trophies (both the tinware and stuffed mammals) around the place and undistinguished (but copious) food.

The Lynxman left us to start scanning, and headed off to check nearby areas. He had only be gone five minutes when we heard a rally car screaming down a forest track towards us. The Lynxman arrived, screeched to a halt and screamed something in Estonian. My knowledge of the language may be somewhat short of fluent, but I quickly got the drift and leapt into the car before it had stopped moving. Tarvo and Marika jumped aboard and we hurtled along the track. The Lynxman had just bumped into the female Lynx on the track we had all driven down just five minutes previously. But would she still be there, or would she have slunk away into the forest...?

We stayed at the quite simply marvellous Adami Country House, which was just 200m from one of the woodpecker sites. This was a gorgeous property, run by Eva-Maria Liiv, full of light, space and Eva-Marie's quite sensational cooking. This places really needs to be on the international tourist map. A delight!

We were a little unlucky at Lahemaa. We tried two areas for Three-toed, White-backed and Grey-headed Woodpeckers, and dipped. Partly this was due to suboptimal weather. But largely it was due to me slipping on ice, and smashing rib and various Canon gear. A hospital trip ensued, eating into the sole sunny afternoon of our trip. And the target woodpeckers in this lovely national park stayed hidden. 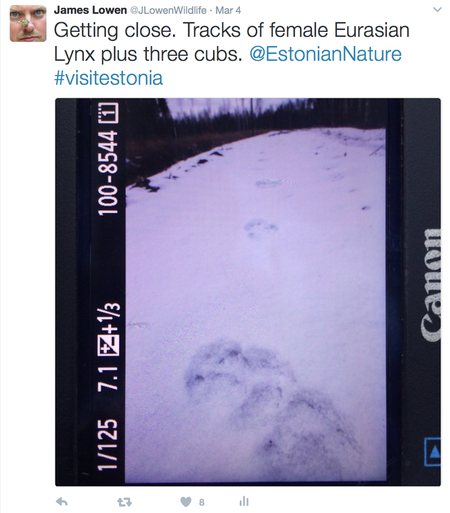 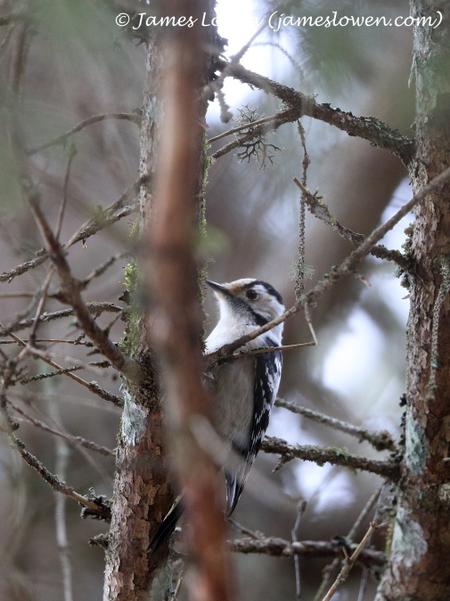 So... a short but (rib-)cracking trip. Has anybody reading this seen both Europe's big cats in fewer than eight days...? If so, I want to hear from you!

We decided to set up a base, complete with camping chairs and sleeping bags, for a vigil. We had vistas over an open area and along tracks in four directions. Spirits were high. 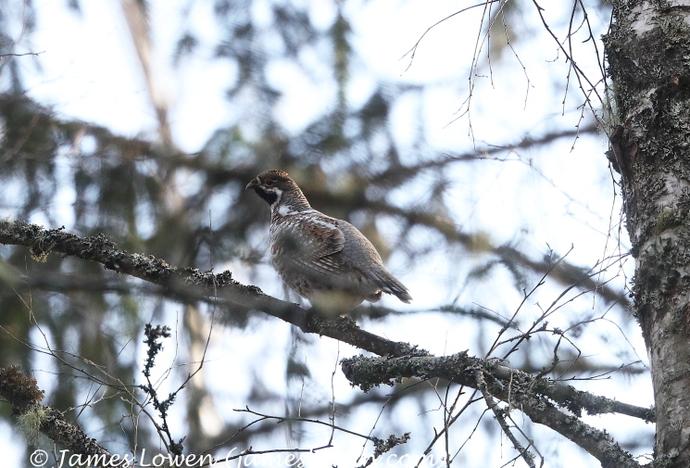 Before I arrived Marika had informed me that 'The Lynxman' had tracked a female Lynx plus three cubs to a small area of Kõrvemaa; here they seemed to be reasonably static. This seemed as good a chance of success as I could hope for. On our second day, The Lynxman found some fresh tracks of the quartet. Game on! We hurtled out to the site. 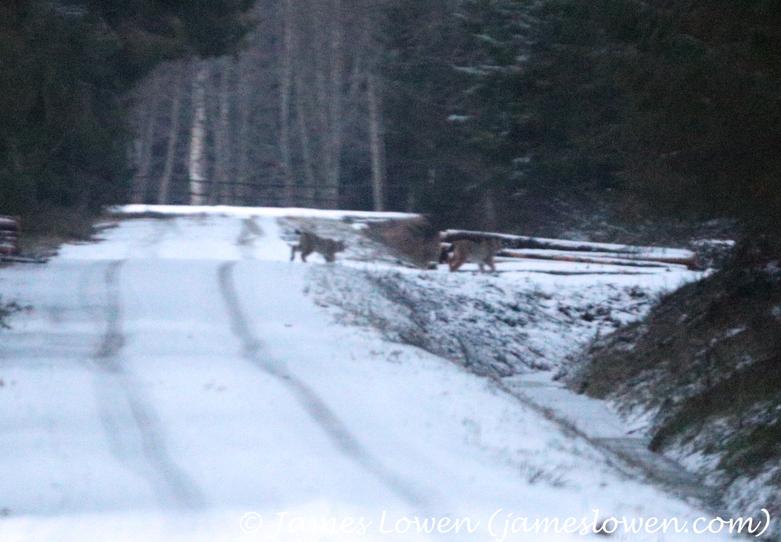 Nonchalantly crossing the track ahead of us, a cub followed its mother. I grabbed some record shots through the vehicle windscreen at an absurd ISO (but one only possible with my spanking new Canon 1D X II!). We got some slightly closer views, then they were gone. YEAH!

Back at Jäägri Villa, open woodland/parkland opposite the hotel held Middle-spotted Woodpecker (only my second ever, and a recent colonist here). Heading an hour north to our second site, Lahemaa National Park, Tarvo spotted a roadside Lesser-spotted Woodpecker, which was nice to see, particularly given their rarity in Britain nowadays.

Magical, magical, magical. Two species of Lynx in successive weekends. Brilliant. Plenty of other stuff to see too. Mammalwise, we had three Elk plus plenty of tracks; fresh prints of Grey Wolf (a species I need!), Otter and Badger; a score of Roe Deer; Mountain Hare; Brown Hare; and plenty of evidence of Beaver.

Marika & Tarvo had secured the services of Ivo, a hunter-guide with an intimate knowledge of Kõrvemaa. Contracting 'The Lynxman' (as we called him) proved essential: he knew the maze of forest tracks brilliantly, appeared to have two sets of eyes (he was that good at spotting mammal tracks in the snow, while driving), and had a 4WD (essential here: at times we were driving through relatively deep snow). The Lynxman also put in the hours before and during our visit, working on what mammals had been walking where. Put simply, we would not have seen Eurasian Lynx without him. If you wish to visit this site to see Eurasian Lynx - and, as I shall explain, these animals are twitchable for the next couple of weeks at least - you simply MUST use Ivo, who is reached through Estonian Nature Tours. Try to save costs by not doing so, and you will dip.

Before drawing a line under the trip, we had a nice encounter with a pair of Hazel Grouse, which even showed briefly in the open, perched up in a tree.