Those were the three BB rarities of our Fair Isle stay: Bluetail, Pechora, Lancey. In any other autumn, they would have made for a fine stay - certainly better in pure rareness terms than our 2014 trip. But they were below par for what was surely hidden somewhere on the island. Then there were the scarce migrants: birds such as Short-toed Lark, Little Bunting, Great Grey Shrike, Siberian Chiffchaff and a handful of Yellow-browed Warblers. My favourite of these was the confiding lark - only the second I have seen in Britain. After disappearing for a day or so, it even gave us a send-off by flying overhead, calling away, as we traipsed towards the airstrip for our departure flight. 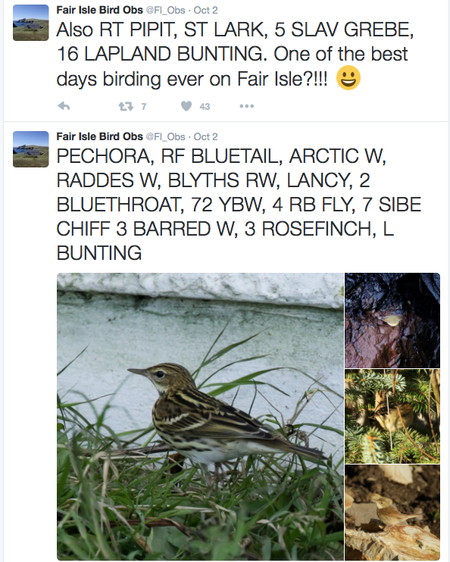 And we found... pretty much nothing. Graeme flushed presumably a long-staying Great Snipe, but before the rest of us even reached Fair Isle. The team (without me) flushed an Olive-backed Pipit, but didn't manage satisfactory views. I, without the team, heard an Olive-backed Pipit three days later, but couldn't even see it; it was later found by Steve Arlow 100m away (and I didn't see it then either!). We relocated a Pechora Pipit down a geo (it had been seen in thistles three days earlier and heard flying over the next two days), which got us going, but that was it. There simply was no biggy on Fair Isle, which was highly frustrating given the morass of rares elsewhere (Orphean Warbler, two White's and a Sibe Thrush on Shetland, the latter found by friends David Bradnum and Howard Vaughan; and White's and Eastern Crowned Warbler and even a blinking' Black-browed Albatross on the English east coast). I was fuming.

The Pechora Pipit was also good, although again I flunked the photos. We relocated it in a geo, and then saw it on a couple of days in a croft garden.

We arrived on Monday to find the island's birders on a high after one of Fair Isle's best-ever day's birding on the Sunday. 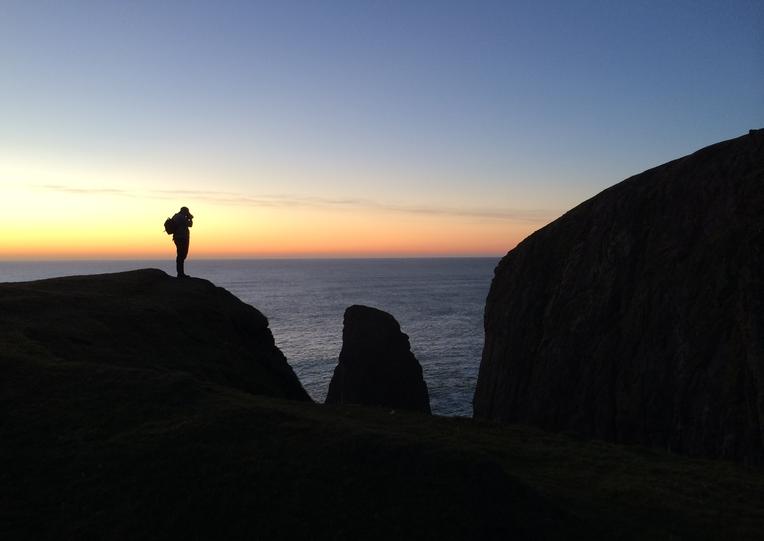 I also enjoyed the Lapland Buntings. We saw up to 15 a day, and most were confiding once you worked out their habits.

And when it got really deathly, I even resorted to papping a Shetland Starling. Beautiful, underrated creatures.

So we walked across hill and along dyke, and even up (and down and up and down) Hill Dyke. We tramped through marshes (indeed, I even fell in one, up to my waist), peered into crofts, and teetered on the edge of geos.

In contrast to our 2014 Lancey, which was about 75m downslope of this year's bird and utterly 'porned it', I failed to get any photos. This is the amusing 'best'. Tertial structure showing nicely, but that's it.

But hang on... this is Fair Isle, right? In early October? So of course there were birds to see. And damn good ones at that. Within half-an-hour of arriving on the hallowed island, we were watching a Lanceolated Warbler. It was a classic Lancey experience, with the bird skulking and flushing, only intermittently giving views. My favourite observation was watching it stride into an abandoned fridge. Quality. 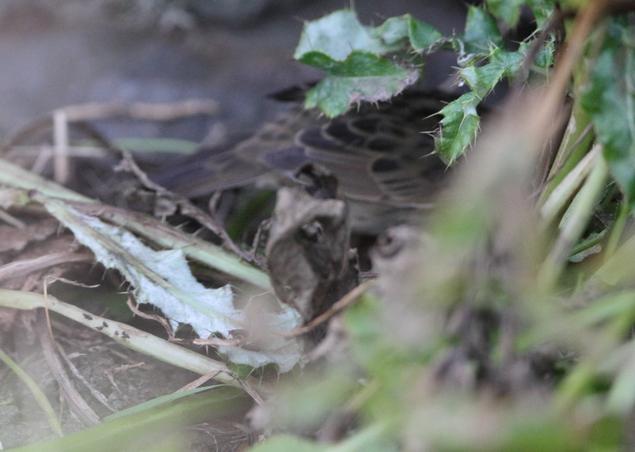 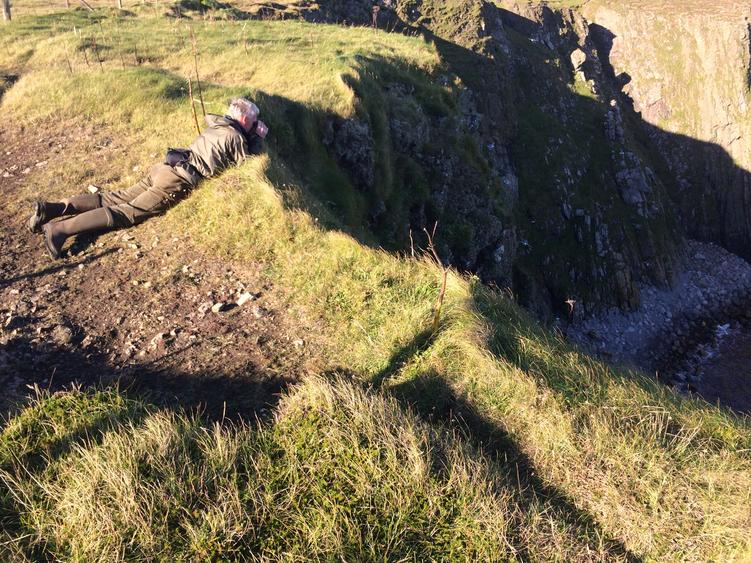 Another perilous twitch involved peering down into a geo to see a Red-flanked Bluetail​ on our final morning. I think this is my tenth Bluetail, which is quite amazing given the species's status as a giga barely 20 years ago.

Unfortunately, everything went downhill from that Sunday until we left on the Friday. Sunday night saw a mass clear out, such that - for example - only 6 of the 72 Yellow-browed Warblers remained. Amazingly given this autumn's immense numbers, it took me nearly 72 hours on Shetland before I saw a Yellow-browed at all. With strong south-easterlies, it still felt rare. The biggy was out there, we were sure. There was talk of Siberian Accentor, chat of Gray's Grasshopper Warbler, murmurings of Mugimaki Flycatcher.

When things got a bit quiet, or when I needed a rest, it was time to coax out the Fair Isle Wrens.

You may have noticed that the light is rather good in these photos. That's because we had full sunshine all day every day throughout our stay. Not a millimetre of rain and barely a splattering of cloud. Great weather for sunbathing; but, it transpires, less good for tracking down megas... I'll leave you with a sunrise, and the news that there's a White's Thrush on Unst, at the most northerly point in Britain. Our flight leaves at 14h15. Dusk is about 18h15. What chance of us getting there? Will we even try? Read the Shetland blog to find out... 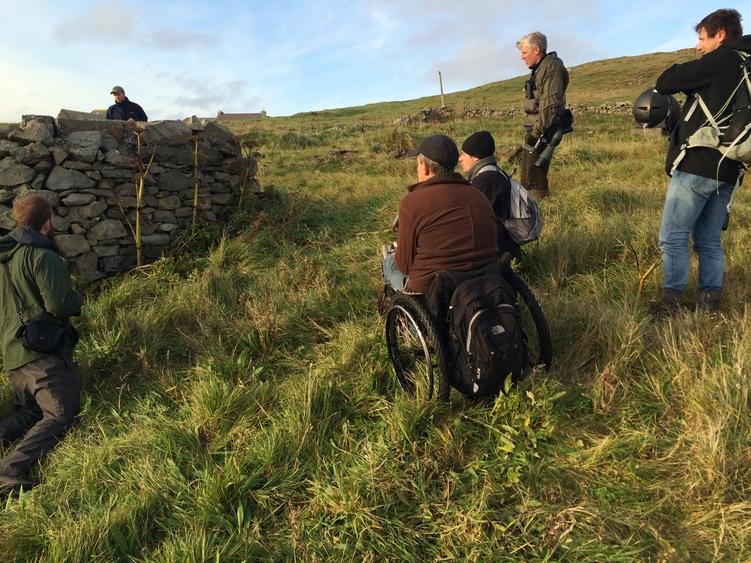 I spent 3-7 October on Fair Isle as part of a RSPB/BirdLIfe-centric 'team' ('crew' in current birding parlance, it appears) organised by Stu Butchart and also comprising Kieran Allinson, Richard Bradbury, Graeme Buchanan, Andy Symes and David Wege. Stu and I had been on Fair Isle two years previously, but nobody else from the 2014 team was able to return with us. 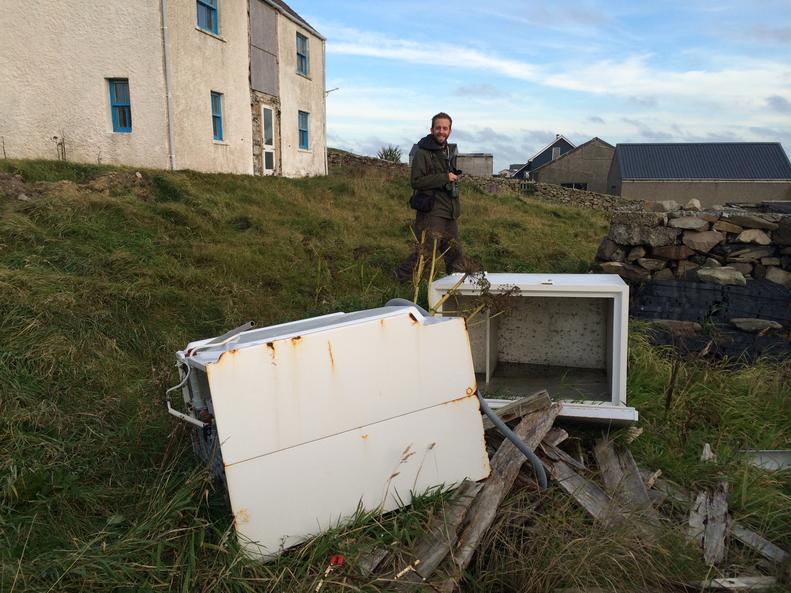 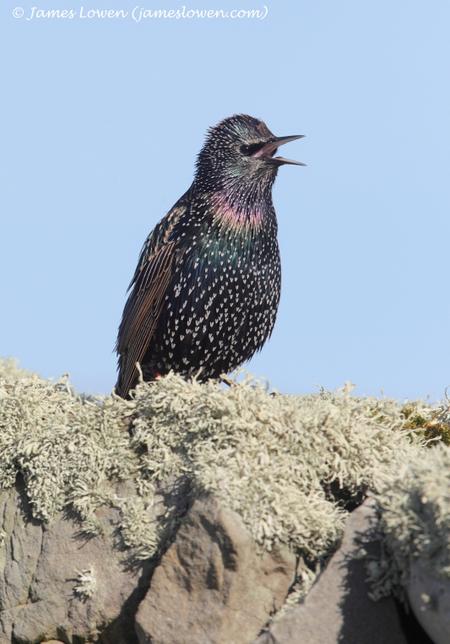 There were also plenty of quintessential Fair Isle experiences, with tired migrants turning up in incongruous locations.